Africa’s cities are expanding, with adverse consequences for food and nutrition security of an increasing share of their population. From a consumption perspective, in urban Africa malnutrition is a multi-faceted issue related to factors including the middle class’ growing purchasing power, but also poverty, poor health environments and insufficient access to safe and quality food. From a supply perspective, African urban food systems and their rural-urban value chains are characterized by the intersecting formal and informal food sectors: small scale producers, transporters, processors and retailers provide a multitude of food products, the composition, quality and final destination of which is largely undocumented. 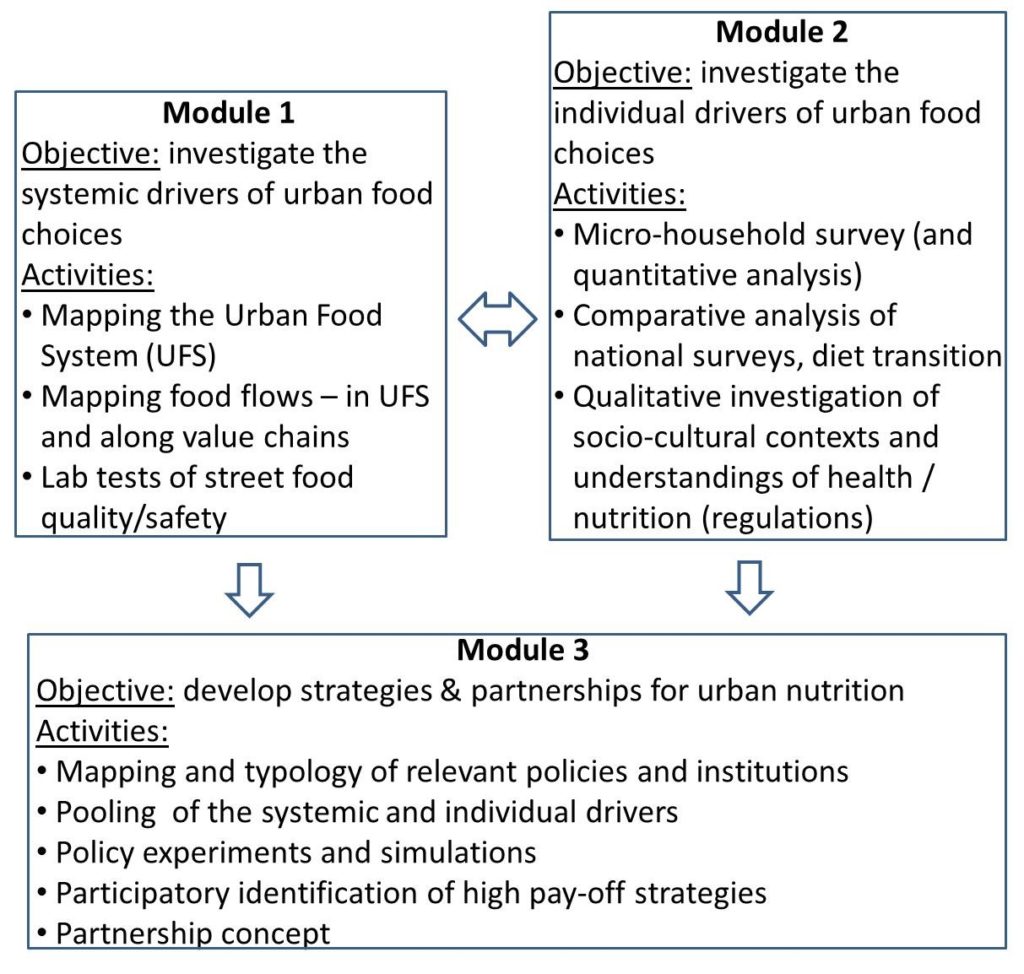 NOURICITY is an EC H2020 ERA-Net Cofund project (2018-2021), funded by a group of donors of the LEAP-Agri Partnership. It project aims at investigating the structure and dynamics of urban food systems in Africa (including rural-urban food value chains) and how they interact with food consumption and behavior in determining the health and nutrition status of the urban population. In particular, it is crucial to reveal the modes of co-existence of the different facets of malnutrition across and within households, as well as their behavioral and systemic drivers. These facets include overnutrition, as captured by the (rising) rates of overweight and obesity prevalence, micronutrient deficiency, for instance captured by insufficient consumption of key food products, and undernutrition, as captured by persisting rates of low age-adjusted height and weight in the population. The research adopts a comparative approach across three countries and study sites in Accra, Cape Town and Kampala. These countries and cities offer a transect of poor to moderately wealthy countries, settlements and neighborhoods.

The research output of the project is informed from the start, including in its design phase, by a participatory and stakeholder involvement process within the food system of the selected urban study sites. This process is meant to ensure a strong impact of the research output in the form of a co-designed partnership concept for coherent, nutrition-sensitive policies and actions in the three cities. Both the partnership concept and the collaborative process leading to it should serve as a blueprint for partnerships seeking improved urban nutrition in Africa.

The first group of activities of the project will describe the systemic drivers of food choices, by mapping the formal and informal urban food sectors, their interactions and rural linkages, and by characterizing and tracking urban food products along their value chain back to their sources. Second, the project will examine the drivers of household and individual food choices: income, access to nutrition-related knowledge (formal and informal, indigenous and Western), or food tastes, habits and culture. Finally, researchers will assess the impacts of systemic and individual drivers of food choices on people’s actual consumption and nutrition outcomes. Together with nutrition and public health practitioners and the identified actors of the three urban food systems, they will then devise and test policy scenarios.

The final NOURICITY workshops in Ghana from August 17th to 18th 2022, got news coverage. The Ghanaian Times, the Business & Financial Times and the Daily Graphic published articles about the events.